We asked a local- Steve is a waiter at Bob Evans- where we might take Annie to have her treated for the hot spots she’s developed. Turns out he’s from Michigan (they call this area “Michiana” for good reason: locals don’t see the state line that divides the area) and directed us to a Dr. Bergman in Cassopolis, MI. He’s the vet his grandfather has been using on the family farm for 50 or 60 years.

The Admiral called Tuesday morning and was able to get an appointment the same day. The 1/2 hour drive was more of the same style farmland splashed with ultra green colors that make me think of the pastoral scenes depicted by the classic English painters. Umm… but without the misty background. And definitely no farm workers in tights! We loved the drive and will probably take another before we’re out of here.

Dr. Bergman is 81 or 82 now and doesn’t see patients any longer though he does still come into the office. But it’s a large practice and we instead saw Dr. Mike Lampen. Mike said he thought Annie was over the worst of it (no more green oozy stuff) thanks to what the Admiral had been doing. But he did suggest she might be helped by 3 days of Prednisone plus 10 days of an antibiotic (Cephalexin). Annie told me she was happy she wasn’t going to look like a shaved patchwork quilt she’d feared. She also said she liked this new vet that didn’t scare her or poke and prod in private places. She even rolled on her back to get a belly rub before dragging me out the office door at a trot before he changed his mind!

I waited for the bill and the meds: everything came to about $85 which is on the order of 1/2 what we’ve had to pay in New Mexico. We were very pleased! And with falling temps and a good prognosis for Annie, we were feeling much better.

No, I didn’t crunch another Porsche. Nor any other car or truck!

The vet warned us Annie was going to be super thirsty and hungry. Well, she’s always hungry, so that wasn’t new. But I missed the inference that if she’s more thirsty, she’ll drink more and ultimately would have to pee more. And that she did. She barked a couple times in the middle of the night like she sometimes does for strange noises, and for a response she got the usual “Hush!!” Bad move. When I got up at 7 AM it looked like the washing machine had overflowed. Yikes!

So I’ve saved away yet another lesson: Prednisone means more urine. Got that dummy?! “Umm, (gulp), yes ma’am.” Actually urine has never been a problem as we carry an enzyme-based product from PetSmart called Nature’s Miracle that cleans it up, prevents staining, and removes the smell completely. 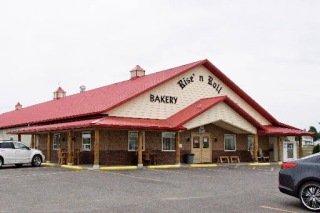 We wanted to do some looking around, and we were hungry (nothing new there!). We had a brochure for a bakery in Middlebury called Rise ‘n Roll which offers lunch (the site takes awhile to load). So off we went. Once there we learned that lunch was from their deli and that there were several benches and tables where you could sit in air conditioned comfort and pack away a large lunch off a paper plate. I had a ham and cheese that was other-worldly… must have been illegal or bad for me as it tasted way too good! Honey ham slices plus local white cheese on a cinnamon-raisin roll with all the fixings including a little bit of raspberry jam. Made me grin all over!

Interesting place with special parking for locals. Many (most?) use traditional transport: a 1 horse power wagon that leaves a calling card wherever it stops!

I’m not sure what to call these passenger vehicles as many are completely enclosed, looking for all the world like a black Brinks armored car. And they’re too big to be a buggy. Maybe a carriage? I suspected they’re fully enclosed to keep nosy tourists like myself from getting a photo of the occupants (a no-no), but a closer look later showed the covering snaps on/off. So apparently it’s a winter covering for passenger comfort. 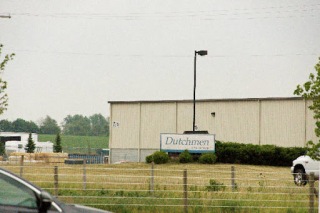 And if you happen to be an RVer who owns a Dutchmen trailer, that manufacturing facility is just across the street in this huge building. I was surprised to see that it’s owned by the Thor company which is the parent company of Keystone RV. Keystone RV includes many familiar brands of trailer-RVs like Montana (our maker), Cougar, Alpine, et al and at last reckoning was the largest trailer-RV maker in the world (not surprising since they own most of the brands!).

Hopefully we’ll get to Shipshewanna tomorrow and visit the Menno-hof Mennonite-Amish center and maybe come away with a little better understanding of what the Amish & Mennonites are all about. Plus we want to see the RV/MH Hall of Fame which is just down the road.

Celia and I are full-time RVers wintering (and now summering!) in Benson, AZ. The 2 bernese mountain dogs that initiated the name of this blog are gone but forever alive in our memory.
View all posts by bruce10b →
This entry was posted in Uncategorized and tagged Dr. Bergman, Rise 'n Roll. Bookmark the permalink.