For about a year now I have been indulging an old passion- I’ve gotten back into roasting coffee.

We like a morning cup of coffee, probably stronger than most people would care to drink. We had been buying Starbucks unground coffee beans. Benson has very little to offer beyond a WalMart and Mi Casa Restaurant, but surprisingly they have a Starbucks inside the local Safeway supermarket.

Unfortunately the Starbucks beans don’t turn over very fast at Safeway, even during snowbird season. We whined a bit about the morning cup but didn’t do anything about it. Prior to going on the road (in late 2003 I think) I started roasting our coffee first on a tiny hot air roaster (FreshRoast?), then a few months later I bought a drum made by a guy in Charleston, SC. and used a cheap CharBroil BBQ grill to heat the drum. I had the drum mounted on a spit driven by a 60 rpm 1/4 HP motor. We had a lot of great coffee from that setup, but it all went away when the house was sold. And so too did the beloved Giotto espresso machine and the Mazzer-Mini coffee grinder. 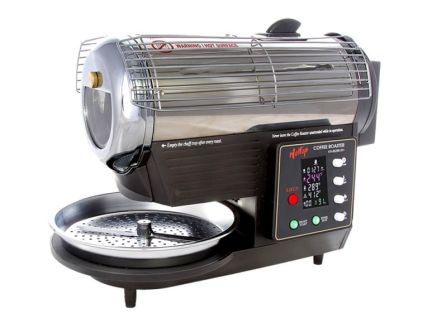 So when the Admiral asked if I ever thought about roasting coffee again the answer was a quick yes. I bought a small electric drum roaster called a HotTop which handled just 250 gm of green beans per batch.

This small but sophisticated roaster did a great job. Artisan Software, a free program that could display data in a graph and even control the roast, did an adequate job. But I got a little frustrated on those days when I had to do multiple roasts- I spent twice the time waiting for it to first cool then creep back up to temperature than I did roasting. I knew that Aillio makes a larger roaster with an induction heated drum, but they were updating the design and taking forever to get back into production.

Then suddenly last January 2019 a shipment was announced. I hung out on the Sweet Maria’s site on the magic day and managed to grab one before all 120 roasters were gone. 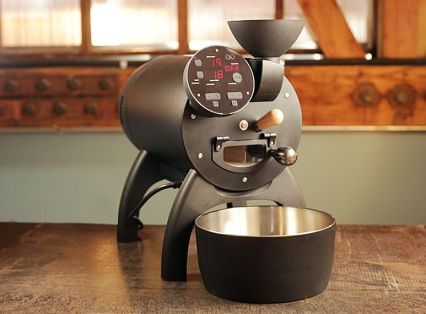 Aillio Bullet R1. A reasonably sophisticated electric roaster that was designed in Denmark and manufactured in Taiwan.

The Aillio Bullet R1 uses about the same amount of power as the HotTop, but instead of a resistive heating element adjacent to the drum, they use an induction coil to heat the drum. Induction heating has been used for industrial applications since the 1940’s but it wasn’t used in kitchens until recently, first in Europe and now in the US. The reason induction heating appeals for roasting coffee is that it provides rapid changes in temperature instead of the very slow response of indirect radiated heat from a resistive heating element. And the Bullet can handle up to 1 kg of green beans (about 2.2 pounds) vs. 250 gm (just over 0.5 pounds) of the HotTop. 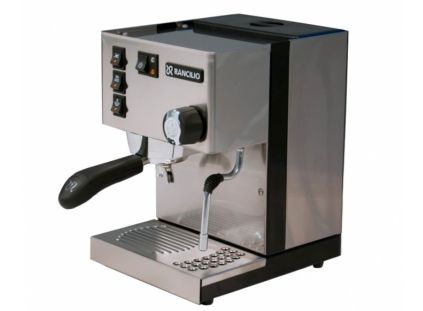 The “Miss Silvie” from Rancillio. These were originally designed as sales awards for top-performing distributors but they were so interesting that Rancillio went into production in the late 1990’s for the consumer market.

Of course if we’re going to have brewed coffee during breakfast, the Admiral also wanted to have a cafe con leche in the late morning. That takes an espresso machine, but an espresso machine is big and uses a lot of electrical power… which there’s not much of on a trailer. But there is a small espresso machine from Italy called a Rancilio Silvie that would fill the bill nicely. I found a used recent model and ordered a PID for it. A PID is a bit of electronics that controls temperature. The kit I ordered was designed and built by Auber Instruments (there are dozens of sources) which replaced temperature sensors and introduced pre-infusion into the brew process (it wets the coffee before it starts pumping water for the shot).

Initially I tried using our old $65 Capresso, but that couldn’t grind fine enough for espresso. So I did some digging and found a Eureka Mignon that sounded great. Only problem was the grinder design doesn’t handle static electricity very well and the grind comes out in clumps. I was accustomed to turning out really good shots but with this grinder I was turning out crap. I finally accepted the issue was that I wasn’t using the right amount of coffee from one shot to the next and that it was because of the clumping.

The Baratza Sette 270Wi. Choose the amount of coffee in grams and it nails it!

More research. I found a new grinder design that measures the weight of the coffee being ground directly into the portafilter. Sounded slick. The Baratza Sette 270Wi would resolve the uncertainty of how much coffee was being used for each shot for less than 1/2 the cost of a replacement Mazer-Mini.

There were a few negative reviews by owners about the grinder failing, so as a precaution I bought a 3-year warranty from Amazon just in case (something I would normally never do!).

The grinder performance was amazing. Just set the desired quantity of coffee – I use 16 gm for an espresso shot – and within 4 attempts it’s on the money. If it’s off, the error is on the order of 0.1 gm.

After 3 months of really good espresso shots the motor became first intermittent then quit completely. I whined to Baratza customer support and after jumping thru a few hoops to confirm what the problem was they replaced the grinder with a new one. Yay! Back to great espresso shots. But I’m still glad I got the 3-year warranty because having been bitten once I’m still uneasy about long term durability.

So that’s what’s been happening here in Southeast Arizona. That and way too many green coffee beans have come to live with us!

When I mentioned Safeway above it jogged my memory that I have a bit of a connection to that supermarket chain from 2 generations back. I understand Safeway is now owned by Kroger’s, but back in the days before WW-II my paternal grandfather managed a Safeway store when they were an independent corporation. They were a big presence in the San Joaquin Valley of California. In fact ‘JO’ retired from Safeway and received a small pension. In those days there was no Starbucks and there was certainly no coffee from a grocery store that didn’t come pre-ground and in a can: think Folgers.

Celia and I are full-time RVers wintering (and now summering!) in Benson, AZ. The 2 bernese mountain dogs that initiated the name of this blog are gone but forever alive in our memory.
View all posts by bruce10b →
This entry was posted in Uncategorized. Bookmark the permalink.