We left Effingham, IL a day early cuz we had gotten a call there was room for us on Saturday nite in Pendleton. That conveniently broke the 310 mile Effingham-to-Elkhart trip into a 180 mile leg plus a 130 mile leg. Mrs. Bowman’s little boy is much happier with these smaller, bite size pieces.

The shorter legs were definitely the way to go, but these 2 campgrounds are hardly a comparison. GloWood is a little rough around the edges with ruts that have been filled with gravel only slightly smaller than sharp boulders. The rig was rocking from side to side like a round bottom boat lying beam to the waves. With access roads like that you might expect the sites were just as bad but that wasn’t the case. Our camp site was nice and level and we got a good nights sleep. All the camouflaged ruts, however, suggest this may not be a good place if it’s raining or going to rain while you’re there. I could see us plowing furrows with wheels buried axle-deep. 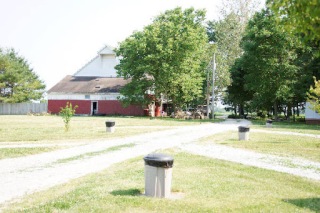 The owners have done a great job with the grounds of the park. There’s a large playground and picnic area under tall shade trees that greets you as you enter. The ‘office’ is built into a side of the picturesque red & white barn that looks strong enough to handle a California earthquake. All very appealing if you were to spend a few days. And Indianapolis isn’t far away if you’re a confirmed Urbanite.

The only thing uncomfortable was the heat and humidity. Yikes! Temps are setting records around here. The average is supposed to be 74 deg F but instead we saw 95 F on Saturday and 97 on Sunday. It was the hottest Indy 500 ever. A camper in the Airstream next to us at GloWood was going to the race and would be in the infield: no shade the whole time there and a mass of people blocking any hope of seeing. Tough people to deal with that!

Fuel prices are up again, now that we’re in Indiana… back over $4/gal.

The drive to Elkhart was one of the nicest we’ve had this year. We were on state or county highways all the way from Pendleton (never did see a town by that name!) due north to Elkhart for about 125 miles. Almost straight as a tight string. Well… excluding the detour to avoid the bridge that was out on IN-15. It’s all farm land- green, no fences except for where they were keeping animals, friendly people. No one seemed too angry about having an RV in front of them.

And stop signs everywhere. With all the stop & go our mileage was down to 9.4 mpg. That’s one of the drawbacks of farm country. As you pass thru all the open land, not all the roads line up because of property lines. So there’s a stop sign where you need to jog 50 yards to the left or right, then accelerate back to 55 mph. 55 mph is our most economical speed, but stop & go throws away that bonus.

And it was hot! That seems to be the signature for this year’s travels. Way above average and apparently a repeat of last year.

Aside from what it does to fuel mileage, there’s a draw back to driving thru farmland: no rest stops and no place to pull over to the side of the road. Especially after we got to Goshen where even the tiny 3′ shoulder disappeared and was replaced by a curb. 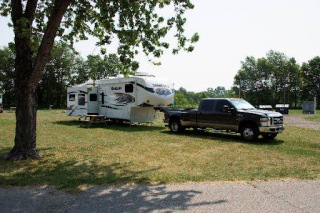 I’d heard of this place a few years ago, so I was looking forward to seeing it for myself. About 250 spaces on grass, mostly pull-thrus with 50-Amps & full hook-up. The sites are wide and are level, at least where we are. There are only a few trees, but they’re tall and cast a decent shadow before or after mid-day.

There are folks here from all over the country and they have a single purpose: this is Amish country and they all want to steal an unwelcome photo of an Amish farmer driving his family to the store in their horse drawn wagon. The Admiral knows all about that: she and her brother stopped at an Amish farmer’s field where he was working. The Admiral snap a photo and the next thing she knew a very grumpy farmer came stomping across his field as he rolled up his sleeves. Her bro shoved her in the car and drove off saying “You trying to get us killed?!” So I’ve been warned about taking photos of the Amish. Not really a problem for me as I’m uncomfortable sticking my camera in a stranger’s face anyway.

At any rate, we loaded up on brochures and will make the rounds with the others. We understand the Visitor Center here has free audio CDs available for a self-guided tour of the Amish country here. 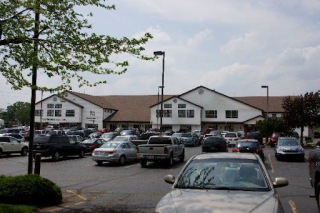 Best way to learn about an area is thru the food, right? Well, it works for us!

Essenhaus had been recommended to us as a place to good German cooling. It turned out not to be German: the correct name is Das Dutchmen Essenhaus. But it’s close enough for us tourists I guess. We had a huge meal of comfort food that had us grinning from ear to ear: Beef or chicken over noodles over a big dollop of mashed potatoes. May not sound great, but it is. Especially when you finish it off with a big piece of fresh strawberry pie with whipped cream!

Essenhaus is a huge complex which contains restaurants (2 in one building: 1 for menu-dining; 1 family style, the latter covers 2 floors), bakery, shops including a very complete quilt shop, performing arts theater, conference center and probably much more. There were literally hundreds of people in the dining rooms when we were there for lunch, and hundreds more outside looking around. It’s so big in terms of area I didn’t even feel the press of people (I hate crowds!)

We tried to walk off the huge load of carbs after we ate and roamed around thru the shops and the grounds. Not many takers for the buggy ride, but in hind sight it would have been a good way to see what was there and to have some info from an employee.

Our dogs are Bernese Mountain Dogs. In Switzerland where the breed originated they’re called berner sennenhunds. As I understand it, that translates roughly to ‘farm dog from the Bern area‘. They’re great big happy campers – one RVer aptly called them mush balls – and they want to be where we are (sadly, that’s not always possible). The breed does well in a cold climate, so all the heat we’re having can be a problem. Since we’re pretty wimpy about the heat too, we have the AC on nearly all the time both in the truck and in the coach. Kelly has been OK with the chilled bandana the Admiral bought each of them, but Annie struggles sometimes. Right now Annie has several hot spots, perhaps the result of not getting enough rinsing after a bath, and we will have to find a vet tomorrow (Tuesday). We’ve been treating the spots ourselves, cutting away the hair then washing and applying an ointment. But it’s become clear our efforts are inadequate (sorry Dr. Breer, we tried!).

Celia and I are full-time RVers wintering (and now summering!) in southeast AZ. Our 2 bernese mountain dogs, Annie & Kelly, that initiated the name of this blog are gone but will live forever in our hearts.
View all posts by bruce10b →
This entry was posted in Uncategorized and tagged Amish country, Elkhart IN, hot spots, Pendleton IN. Bookmark the permalink.

2 Responses to Postcard from Indiana- 1