Tombstone bills itself as the “town too tough to die”. Even more impressive is Stanton, MO- the town that doesn’t exist! At least that’s what Ms. Garmin would have you believe. They have a postal zip code, but apparently that’s not good enough.

Anyway, the KOA campground in Stanton was just what we needed for our overnite stop. Dan & Barb are the owners and they keep the place neat and clean. And, since there’s no restaurant in town, they offer on-site BBQ meals at the small cafe. I had a half-rack of spare ribs and the Admiral had the pulled pork. When we compared notes later we decided I had the better choice.

Our neighbor for the night was a friendly guy named Les Josephson who turned out to be a former NFL player. Les spent 11 years playing for the LA Rams (1964-1974) as a running back and even made it to the Pro Bowl one time. He accumulated enough injuries that he has needed 11 surgeries, plus he’s looking forward to having both shoulders replaced as well as one knee.What a way to earn a living. Yikes!!

OK… time to talk (whine?) about navigation a little. We do our navigation first with planning using a combination of  either Google or Yahoo! Maps. Then we add in Woodall’s (either on-line or the paper directories we buy each year) or, if we need to, the KOA site or directory. After I work out all these details I save the map which now has the directions embedded. Then I make sure each location can be found on the Garmin where I save the destinations to Favorites so I can recall each one when needed.

Generally that’s gotten me pretty much everywhere so far… until I looked for KOA Stanton. Which lives in Google maps but doesn’t exist in Garmin. No problem: Woodall’s has latitude/longitude, right? Close, but no cigar! Apparently Woodall’s only has complete info for those campgrounds that pay for a listing. Since the KOA in Stanton doesn’t pay for a listing, there’s no lat/lon data. Woodall’s apparently is not as complete a guide as they would have you believe.

So, what to do. Well, there’s a site called GetLatLon.com which gives you a Google map which you can slide around under the cross-hairs and simultaneously display latitude & longitude. Cool. Armed with lat/lon you can go into the Garmin and choose Coordinates and plug in the info; Save the location; and Edit the listing to add a Name, Phone # etc. I found the GetLatLon.com site from hams who use it for computing great circle paths to another station when they use a directional antenna. 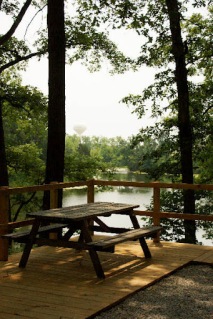 So… where the hell is Effingham?! It’s actually a fair sized town with a high school, a Cracker Barrel (yes!), a WalMart (double-yes!), it is probably the seat of Effingham County, and it has an RV park called Camp Lakewood. The campground is a rustic park which is located in a grove of mature trees (ash?) adjacent to a small fishing-only lake (no swimming). A really nice place run by owners Brian & Vanessa Caton. The access is via a narrow county road that was built for automobiles and not the likes of big Class motorhomes or heavy 5th wheels. I was a little unnerved but the Admiral kept urging me on and sure enough, completely hidden from view and free of all Interstate noise, now found this little bit of Illinois heaven. Well, OK… a little over the top. But when I arrived I was whipped and it seemed like heaven to be off the road! 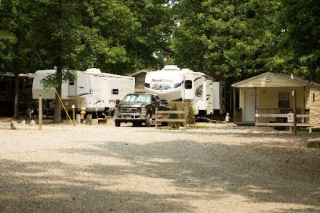 I had asked for a pull-thru site, but by the time we arrived I decided I wanted to stay 2 nites which wasn’t possible. They were, however, able to fit us into a back-in site. I thought “oh crap!” Brian said he’d guide me in and I’m happy say he knows what he’s doing. Got us parked in short order in a site that has good shade. The only odd thing is that the water hose is led under the RV from the curb-side, but that’s no big deal.

I had tried a couple times to get our next stop reserved but struck out at the first one (3-day minimum) and the 2nd park (GloWood Campground north of Indianapolis) never called back. So I asked for a 3rd nite which unfortunately meant an over-300 mile day on Sunday to get to Elkhart Campground in Elkhart, IN. This morning I found a missed call from the GloWood park saying they had space and had my name on one of the pull-thru sites. Happy day! That will break the trip to Elkhart into two 160 mile days and maybe the Captain won’t be such a grump when we finally get there.

If there’s a Cracker Barrel anywhere close, we usually opt to eat out. We’ve always had good meals and look forward to wherever we next find one. Last nite, however, was not much to write home about. Maybe it was an off night, or maybe it was us… we’ll see what the next CB brings.

We use Alternative Resources in Sioux Falls for our mail forwarding. We had them send mail to Branson, MO and now we’ll get the next batch sent to Elkhart, IN. In 2-1/2 years they’ve done fine in getting mail to where we are. While it’s FedEx that does the transport and delivery, Alternative Resources has always done a good job collecting the mail, dumping the advertising, repackaging large orders (to minimize the number of boxes) and generally keeping order. Plus they have a dedicated person that does nothing but vehicle registration. Karen was a big help to us when establishing residency in South Dakota.

Celia and I are full-time RVers wintering (and now summering!) in southeast AZ. Our 2 bernese mountain dogs, Annie & Kelly, that initiated the name of this blog are gone but will live forever in our hearts.
View all posts by bruce10b →
This entry was posted in Uncategorized and tagged Alternative Resources, Effingham IL, Stanton MO. Bookmark the permalink.

2 Responses to Postcard from Illinois- 1