We made it to Dewey Short Visitor Center on Sunday, took a few photos and took the tour of the dam. To my huge disappointment I learned we aren’t allowed to take cameras, cell phones or pocket knives into the dam. Homeland Security controls all this sort of thing on Corps of Engineers sites and I was about to break 3 federal laws. Mrs. Bowman’s little boy decided it was getting to late in life to start a criminal career, so he dutifully handed over all the contraband as the trolly entered the dam parking lot.

So I have no photos of the dam interior (yep… we walked into 2 different galleries inside the dam!) nor of the 4 generators in the generating room. We’ll have to make do with this shot of the back of the flood gates of Table Rock L Dam taken from the observation area on the lake side of the center.

When we were there none of the generators were operating, so we had a quiet tour, but we were assured that when they get a call to spin up 1 or more generators it gets really loud in the generator room. Unlike some hydroelectric sites, this one operates only as demand on the grid requires it.

Btw, when the generators are operating, they have to sound a siren, wait 15 minutes, then open the “wickets” (rotating blades which block the water flow to the turbine). The reason is that the outflow dumps into Taneycomo Lake where it raises the depth of the water by 3 feet for each generator that’s turned on. That in itself isn’t an issue… unless you happen to be one of the trout fishermen in waders out in the middle of the flood plane! Lake Taneycomo looks essentially like a river in the area below Table Rock Lake Dam., so they have to hustle their butts out of there when the siren sounds.

The reason they’re fishing there is because the water  coming out of Table Rock L is very cold… on the order of 47 deg F this time of year. Trout like cold water (it contains more oxygen) and the fishermen go where the trout are. As do the Blue Heron.

Sunday was a good day to go to the visitor center as Dave & Becky were working that day and we got to chat a little before the tour… in their uniforms no less!

Then later we got together for dinner. Dave drove so no one in the truck had to worry about The Captain having a repeat of his parking lot fiasco a few days ago!

We ate at MacFarlain’s which is inside the building which also houses the IMAX theater. MacFarlian’s had chicken and dumplings on the menu which I’d been talking about not having seen on a menu in years, so it was time to order it. I don’t know about the rest of y’all, but I had an excellent dinner.

And if you don’t know what dumplings are, they’re kind of like a boiled biscuit instead of the usual baked. Done right they’re like a light, fluffy biscuit without the baked crust; done like my mother did them… well, they were less than great. My grandmother, however, was a master at making dumplings so I got hooked at a very young age.

On the way home we stopped at the scenic outlook on MO-165. I think Becky figured we were never going to stop on our own, so she took the initiative.

It had rained while we were eating and a cold front had moved in, so there was some mist rising from the river and wet areas. Looks almost like smoke from cabins hidden in the woods. OK… I admit it. Shoulda’ stopped sooner at the Scenic Outlook. The location offers an amazing uninterrupted view of the Branson area, Table Rock L & Dam, and Lake Taneycomo.. But it wouldn’t have been near as pretty as it was Sunday evening!

Monday morning I talked to our GMAC claims adjuster and learned we don’t have to have the truck inspected. Cool! The claim is in process and they should have contacted the owners of the Porsche by now. So we should be on the road again on Wednesday morning, heading for Elkhart, IN.

In the mean time we’d spotted the old town area of (I think!) Hollister which looked interesting and I thought there might be a chance for a few photos. Plus I’d seen a station in the area that had diesel cheaper than I’ve seen in awhile. We headed over to have lunch at the Branson Cafe. The sign in the window says 1910, but the food is much fresher than that. We had cheeseburgers and blackberry cobbler.

Then we did the 2 or 3 block tour of the old downtown area which included Dick’s 5 & Dime.  Straight out of my childhood if it had still had the Woolworth sign out front.instead of Dick’s. 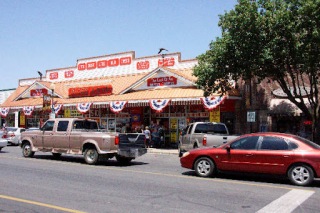 When you visit the old town area you can’t help but see the Hilton Hotel there. It was hit pretty hard by the 29 Feb 2012 tornado and as far as I can tell is still closed for repairs. You might think that it’s just a case of replacing some missing windows, but as I understand it the damage goes much deeper inside the hotel.

We used this public parking garage which obscures the cenvention center just to the right of the Hilton. Looked like it had its share of damage as well.

The Hilton isn’t the only one that was hit, though it was the tallest and easiest to see. There’s a lot of damage which, as I mentioned before, is uneven as the tornado touched down then lifted only to touch down again. Nasty stuff.

Oops! I was momentarily possessed by the pun-genie. It frequently jumps into my head and I can’t seem to control these temporary urges to utter corny puns. Just keep in mind that you, dear reader, would have thought of this as literary genius had it come from George Bernard Shaw or Will Rogers!
Just down the road from old town is Casey’s General which looks to me to be an industrial strength convenience store. We stopped there for fuel cuz I saw a tour bus fueling up. At $3.699/gal it was the cheapest diesel we’ve seen in a long time.

Getting ready to move again

This is Memorial Day weekend coming up and I’m not sure what to expect for crowds. Probably sizable since the further east you go, the earlier folks plan their vacations & holidays. Unlike the west where planning a trip consists of making sure the gas tank is full, these more-easterly folks actually make reservations. Way ahead! So I’ll have to do some calling on Tuesday to see how much trouble we’ll have when we head out on Wednesday morning.

Celia and I are full-time RVers wintering (and now summering!) in southeast AZ. Our 2 bernese mountain dogs, Annie & Kelly, that initiated the name of this blog are gone but will live forever in our hearts.
View all posts by bruce10b →
This entry was posted in Uncategorized and tagged Becky and Dave, Branson, MacFarlain's. Bookmark the permalink.

2 Responses to Postcard from Missouri- 3