We arrived in San Antonio at KOA Alamo. Pretty nice facility! Lots of trees, all of which are looking quite naked this time of year. There’s a stream very near our site- Salado Creek- and there’s even dichondra hanging on to it’s native green color. In the past when I ran into a mix of Bermuda, dichondra and rye I called it weeds, but in RV-speak it’s called grass.

The drive from San Angelo was pleasant with very little traffic. Mr. Garmin designed the trip to take us through cotton fields just east of San Angelo and ranch land for the rest of the trip. We had 4 lane US-highways with just enough 2 lane to keep me alert until we joined I-10 at Junction, TX. On I-10 we had a lot of steep grades from Junction to San Antonio and I watched the fuel mileage drift relentlessly down to 11 mpg.

As pleasant as the drive to the outskirts of San Antonio may have been, the drive thru the city to the RV park was hell on wheels. And this was before the commute started. Once off the Interstate we were dumped into an industrial area with pock marked streets common to war zones or heavy trucks. Perhaps it was this high tension prelude that makes the park seem so deliciously tranquil. 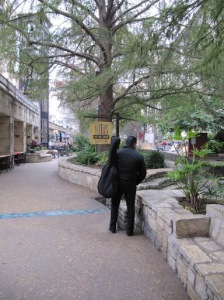 We had grey weather  starting 10 minutes after we arrived. But we were determined to get out to see the San Antonio River Walk. This mariachi was hanging around waiting to get into Rita’s restaurant and looked about as glum as the whole day had been. In a couple hours he’ll need to be in happy mode! 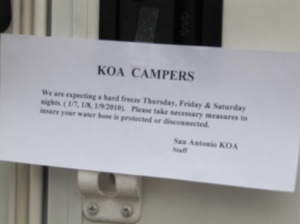 When we returned to the park we found this note attached to the door. Good thing we went out when we did! It turned cold and generally ugly, so we did little more than pull on our woolies to walk the dogs for the rest of our stay here. It was generally miserable.

We bailed out of San Antonio with our collective tail between our legs, beaten by the cold. Again. I know better than to whine because I realize how hot it can get along this route, but we are wondering when we’ll be treated to slightly warmer weather. I can only hope that it gets the cold stuff out of the way before we arrive in the Keys where they’re expecting 40 deg F at night… about 20 deg F lower than usual for winter in Key West. 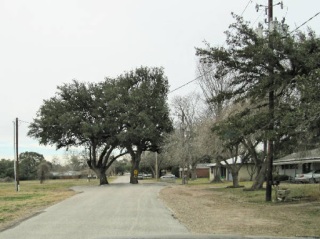 Columbus, TX was a stop beside the freeway for the nite. And yes, it froze again over nite. We did drive into town for din-din and found that folks here have some respect for trees as witnessed by this circuitous preservation of 2 old timers. Wonder if they’ll do the same for me when arthritis leaves me stranded in the middle of the street some day… yuh think maybe? Nah!

Off to Conroe, TX.

Celia and I are full-time RVers wintering (and now summering!) in southeast AZ. Our 2 Bernese Mountain Dogs, Annie & Kelly, prompted the name of this blog but sadly are gone because of kidney failure. They will live forever in our hearts.
View all posts by bruce10b →
This entry was posted in Uncategorized and tagged Columbus, KOA, River Walk. Bookmark the permalink.