Our frantic escape from San Antonio & Columbus, punctuated by near frostbite while hitching up, had us on our way to Conroe, TX and what we feared would be even colder temps. We weren’t disappointed. 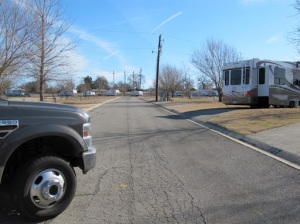 The KOA in Conroe Lake is a huge RV park. It was originally an independent, but newer owners chose to join the KOA system. This is the first time we’ve seen a high-end RV park and we were taken aback by all the ‘toys’. Like the indoor/outdoor pool and 2 fenced dog playgrounds. This park set a new standard for us. But with the cold temps the place was nearly empty save for the employees and us.  Oh… and this brand new New Horizons. Roger & Debbie gave us the cooks tour and it’s gorgeous. And big! You can’t see the big red Volvo 610 they pull it with, but it’s normal to see a 610 as the tractor of an 18-wheeler. 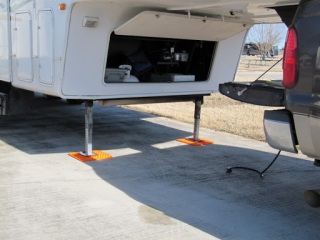 Not only was it as cold as we feared, neither were we free of our current trend of F-O-R-D: Fix Or Repair Daily. It wasn’t the truck (which is doing fine). This time the landing gear was (were? whatever) the culprit. We called a mobile repair service advertised in the park brochure. That person passed us off to someone else because he was out of town and that company, Conroe RV, did the repair. They first repaired the driver side leg (the gears were worn enough that they were slipping), then with that repaired they found the passenger side was also bad. So a one day repair stretched into 2 days and about $750. And as they left they said “btw, the 30 Amp fuse is blown so you’ll have to get a replacement at AutoZone or some other auto parts store.”

So off we went to Brookeland, TX hoping things, both weather and repairs, would improve. Hah!

Celia and I are full-time RVers wintering (and now summering!) in Benson, AZ. The 2 bernese mountain dogs that initiated the name of this blog are gone but forever alive in our memory.
View all posts by bruce10b →
This entry was posted in Uncategorized and tagged Conroe, KOA, landing gear, repairs. Bookmark the permalink.