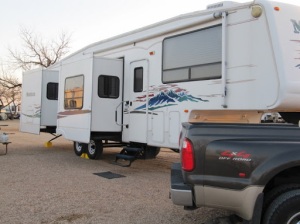 We made it to San Angelo, TX, but not without a little drama. When I got up Sunday AM I found the waterline was frozen. Not surprising since it had gotten down to 27 deg F… duh! That was easy enough to deal with: join the 2 ends of the hose and toss it in the storage compartment to thaw. Better than our neighbor whose internal waterline burst and required some repair work inside.

Our bigger issue was the front slide which houses the settee in the front lounge area. Something in the drive mechanism was slipping and the unit refused to close. Finally I got outside and pushed while the Admiral operated the power switch and we managed to get it closed. Then on the roughly 300 mile trip from Van Horn to San Angelo I noticed the slide would work its way out maybe 1/8″ – 1/4″. Not a lot, but enough that the seal would probably leak in a downpour. 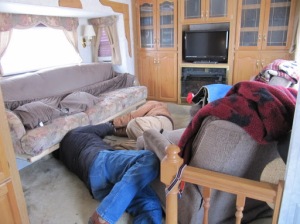 So after we arrived at the campground we contacted a local that has a mobile RV repair service. Shannon and his helper Bud ripped apart the drive, found the Woodruff key that connects the motor drive shaft to the gear had sheared. They found a replacement plus a spare for me to carry for the next time it happens, and had it back together and working in 2 hours. Before they arrived I hadn’t a clue where the motor was located. Now I have a hunch I might be able to replace the key myself in the future.

After resisting the fussy chore of connecting to the campgrounds cable TV (requires changing how the TV cables are connected) I finally gave in so we could watch the Sunday nite game (a disaster if you’re a Cincinnati fan, but the Jets looked great). While the lack of a channel guide to find what’s playing is annoying, the available programming was so far superior to DirecTV that it makes me wonder why we’re paying all that $$$ for The Weather Channel- it’s the only thing we watch. They don’t even offer us CNN except as a premium channel… CNN is a premium channel?! Gimme a break! I think DirecTV may be short-lived around here.

The sun currently is setting about 5:30 around here. Perhaps 45 minutes before sunset we had one of those ‘deja vu all over again’ moments when hundreds of birds (starlings?) started arriving and settling into the trees. It was straight out of Hitchcock’s “The Birds” and was downright spooky! I expected to awake in the morning and find the Dog House covered in bird poop, but we were spared.

The truck is fueled up and we’ll be, as Willy would say, “on the road again”. Next stop San Antonio for 3 days. Supposed to start raining at some point while we’re there. If it has to rain I sure hope it warms a little first. With current temps it would probably be snow!

Celia and I are full-time RVers wintering (and now summering!) in southeast AZ. Our 2 bernese mountain dogs, Annie & Kelly, that initiated the name of this blog are gone but will live forever in our hearts.
View all posts by bruce10b →
This entry was posted in Uncategorized and tagged birds, San Angelo, slide repair. Bookmark the permalink.

2 Responses to Postcard from Texas- 2