We landed in Santa Fe, unpacked, and Celia was off to see Dr. Able for her annual physical. Her doc refuses to renew prescriptions without an annual checkup, so there was no delaying this appointment even though we needed to get back to Benson again because…

We headed back to Benson after just 2 weeks. Before we left for what has turned out to be the still-chilly North, Celia had scored 2 tickets to the Antiques Roadshow on 30 May in Tucson. So on the 28 May we made the drive back, gathered some oldies but goodies (other than us!) and off we went to enjoy the crowds.

Exciting stuff: they had a fire on the set some time before 7AM which delayed everything by 2 hours. We first waited in line upstairs at the Tucson Convention Center, then we crawled our way thru a serpentine line downstairs and eventually got our ticket punch and went into the appraisal area. The appraisal area is arranged in a circular area hidden behind very tall (20′?) cloth-covered partitions. The partitions have gaps about every 20′ where volunteers come get the next person in line and take you directly to the appraiser for the category of item you brought. These appraisers sit at a 2.5′ x 6′ tables with a couple chairs to accommodate 2 appraisers with their tablet or note book computers. They’re fast and it’s up to you to jot down what info you can glean from their very fast data dump. All the while this is going on they’re filming interviews in the center area where the appraisers have taken especially interesting items which will be used in future programs. The brochure we received said 5,000 people would attend the show and that the appraisers would  look at 10,000 items. This show will be aired in 2016 and they will have collected enough video to provide 3 episodes.And all this is done with 43 employees of the Roadshow plus over 100 volunteers presumably provided by the local PBS station.

We were thru the 1st line for wrist- & pocket-watches quickly. I quickly learned there’s a huge difference between a solid gold Patek & Co. Swiss watch and a solid gold Patek Phillipe Swiss watch. My 120 year old Patek & Co. gold pocket watch (belonged to my mother’s Aunt Aggie) was worth $1,000… as scrap gold. My 2 Waltham gold pocket watches are actually gold filled (plated) and are worth all of $100 & $150… just like the other 35,000,000 pocket watches that Waltham made (yes, literally 35,000,000 sold before they were eaten up by Hamilton Watch in the late ’30s).

The next line we were in was for pottery where they looked at the old Roseburg pot that’s been sitting on my dresser in Santa Fe. Apparently it’s worth $250-$300, so that was a nice surprise.

Then came the book line. Aaarrrrgggh! The lines for books and for paintings were beyond belief. It was literally hours to get thru the book line only to be told my old Bret Harte novel, inscribed by the man himself, was previously sold at auction with no notation of the inscription. So just how likely do you think it is that a Bret Harte book signed by its author would be sold at auction without mention of the signature? I don’t think so either! So unless good ol’ Bret came back from the grave to do the honors during the last 7 years, it’s more likely I have a fake signature. That was disappointment enough, but to have to stand in that line for hours to get the bad news was like rubbing salt in the wounds.

All together it was 6 hours of standing in one line or another, but we had a good time and are very glad we went. If anyone out there should have the same opportunity, don’t hesitate to go, but do remember to bring a chair!

After the Roadshow we were off to SST Auto/RV a small RV dealership in Mesa, Arizona (Phoenix) to pick up our new travel trailer. We bought a new 2014 Arctic Fox 28F (2 model years old) for travel in warmer weather and will retire the Montana to ‘house duty’ on our lot in Benson. 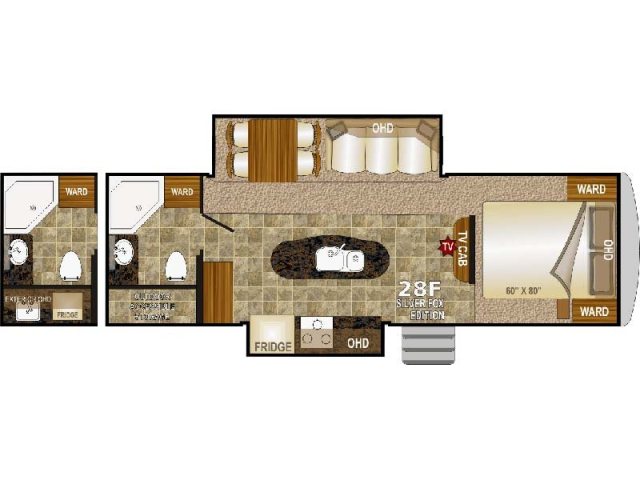 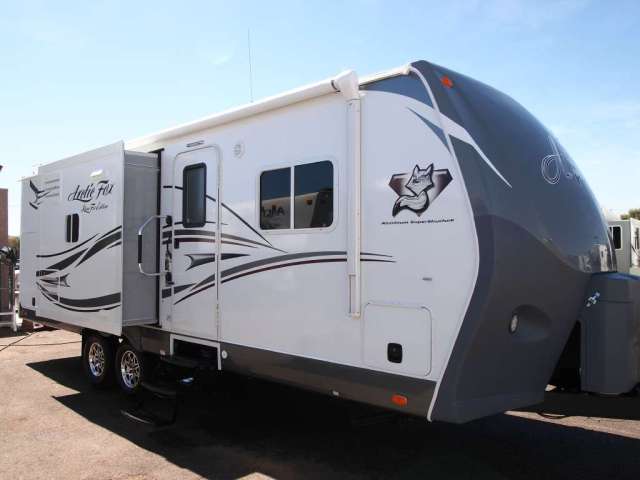 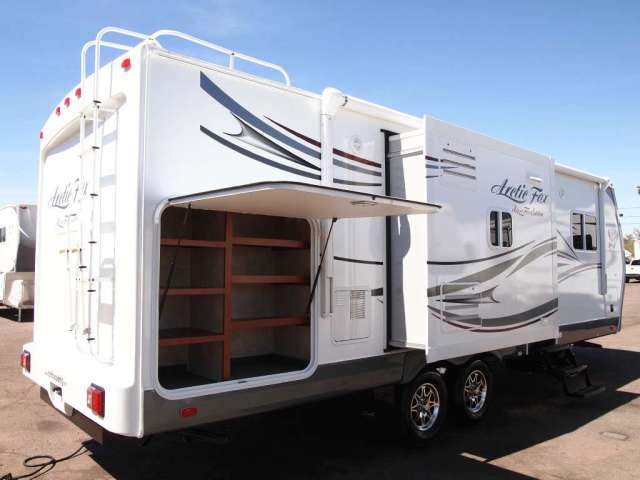 After we got back we spent most of a week going thru the new trailer and were pretty impressed till we got to the bed: it was broken. One hinge on the bed frame was damaged which shifted the bed to the right and damaged the lift spring cartridge when the bed was lowered. There are 2 springs used to lift the frame + mattress + bedding and each has 100# of return force. With only one spring left, the bed frame wouldn’t stay down without the mattress in place.

I feared we would have to go back to Mesa to get the dealer to do the repairs, but after a quick call to Northwood Mfg in LeGrande, Oregon I found all I had to do was find a local RV repair service, have him call Northwood for an authorization, and we could take care of it without a return trip to the Phoenix area. Cool.

We also found the fresh water tank has a 1-1/2″ dump valve (seems like overkill, but… ). Local repair dude Steve Weeks (Kiwi RV Repair… and yes, he’s from New Zealand) will replace that as well. Northwood will ship the parts down to Steve in Benson, so while we return to Santa Fe, Steve Weeks of  will get things fixed for us.

Back in Santa Fe…

So we had yet another 500 mile drive from Benson back to Santa Fe, this time in 95° to 100° F temps. We’re planning on staying till we get the few remaining things done and have the house handed off to the realtor. Once we get it into the hands of a realtor we’ll come back to Benson, get the Arctic Fox and go play for a few weeks. We deserve it! 🙂

August-December 2015
… then back to Benson

In late August we started looking for a replacement for the Montana. We’ve looked at the Cedar Creek Cottage owned by several here in the park and thought that ought to work for us. I did a couple rounds with Camping World SW of Phoenix but they were $$$ for a new unit that was special ordered. Luckily Lazydays in Tucson had a couple different models to look at so we arranged an appointment. I would have preferred ordering but the price was decent and the trade-in barely acceptable. So we bought a 2015 40CCK Cottage (forward lounge).

These images are probably of the 2018 model and differ a little (we don’t have a pantry between the stove and the TV, the bathroom is a little different and the wood finish is  a little different), but it gives you the idea. These things are called ‘destination trailers’ which to my mind means you can move them if you have to but they’re not intended as travel trailer replacements. Especially with the 21 cu. ft. residential fridge, the sliding glass entry door and the dish washer (!).

We were supposed to have it delivered by Lazydays by the Friday ahead of the weekend which happened to also be Labor Day weekend. Come time to get on the road before they locked Lazydays storage yard for the weekend and there was no one around except the poor guy stuck with delivering it. And the 1.5 ton service truck he was supposed to use was nowhere to be seen. He brought out the only thing they had – F150 Ford – and the tongue weight of our trailer flattened the springs. So we used our F350 to move it. My bet is an employee took off with the heavier truck for the long weekend.

The delivery guy had the trailer perfectly placed on the pad on our lot on his first try. Nothing like having a country boy from Arkansas that’s been driving farm equipment all his life do the parking for you. Wow!

A few days after the trailer was in place I added some jack stands to take the load instead of the trailer’s stabilizers and springs. Then we contacted Phillip McFate and asked him to install a fixed awning. That took a couple weeks to get scheduled which gave us time to have Steve Weeks (Kiwi RV) come over and remove the roll-up awning. We also got hold of Custom Iron Arts to build a set of stairs/landing… another 8 weeks which actually worked out very well for timing.

All in all has been a great choice (so far!) and the fixed awning was a great decision. We did have the aluminum upright supports for the awning replaced by Jimmy Luzadder (our office manager’s husband) using 2 steel bridge supports that are hell for strong and eliminated several aluminum supports.

And yes, we still own the house in Santa Fe.

Celia and I are full-time RVers wintering (and now summering!) in southeast AZ. Our 2 Bernese Mountain Dogs, Annie & Kelly, prompted the name of this blog but sadly are gone because of kidney failure. They will live forever in our hearts.
View all posts by bruce10b →
This entry was posted in Uncategorized and tagged Antiques Roadshow, Arctic Fox, Northwood Mfg.. Bookmark the permalink.