We plugged in the address for Steven & Gordon in Rochester and 45 minutes we were parked in front of what was once a marshmallow factory. Like many of the old buildings in the downtown area, this one has been converted to apartments. There are 3 buildings interconnected by an enclosed walkway so you can get from your apartment to the parking garage without braving the nasty Rochester winter weather that normally sees 110″-120″ of snow each year. Yikes!

Their apartment has a great view of the Genesee River. Unfortunately the river is pretty industrial… which means it’s green enough to need mowing! But it’s a great view that most urbanites will never have access to.

Rochester was for many decades the Kodak town. If you watch the evening news you know that Kodak is going underwater and has filed for bankruptcy. Kodak corporate headquarters is visible to the whole of Rochester.

The Admiral’s place in San Francisco was in the Sunset District which is quite a distance from downtown. So this is a different style of living than we’re used to. Very classy apartment, and there’s an Italian restaurant on the ground floor.

Gordon got us rounded up and headed for Lake Ontario. There was a volley ball competition going on complete with announcer and boats anchored along the shore to watch. Which apparently has recently become not so legal as they try to keep the beach safer.

The weather had been pretty warm (90 F the day before), but it was very comfortable by the beach. Lots of bare skin that hadn’t seen the sun for 6 months and was just begging for a sunburn!

The park we were in had an old carousel… vintage 1880. I mentioned it had been decades since I’d been up close and personal with a carousel and the next thing I knew we had tickets and were riding. Look like the Admiral is having a pretty good time riding that wild bronco.

Ans the pair of rabbits caught our eye as it pictures the name of our other web site: rabbit-rabbit.org.

Lunch at an old fire house

After a brief stop at the beach we were off to lunch at Hose 22. And before your imagination gets to carried away, this restaurant is named after the fire fighting company stationed here… Hose (Company) 22. 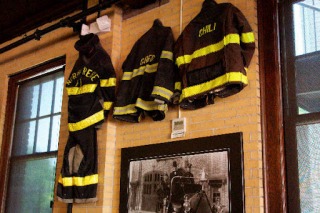 And this is where we had our first fried pickles. Hose 22 uses dill chips (some places deep fry dill spears) that are battered then deep fried and served with a dipping sauce that is incredible.

We loved the lunch, then had to head for the trailer to rescue the doggies before they claimed too be abandoned. The clouds were just trying to come in when we left Rochester, but it was completely socked in by the time get back. By 10:30 it was raining and didn’t stop by the time we pulled out of the park the next morning.

Le Roy, NY was a great stop for us… thanks guys. We’re spoiled rotten!

Celia and I are full-time RVers wintering (and now summering!) in Benson, AZ. The 2 bernese mountain dogs that initiated the name of this blog are gone but forever alive in our memory.
View all posts by bruce10b →
This entry was posted in Uncategorized and tagged Hose 22, Lake Ontario, Rochester NY. Bookmark the permalink.

2 Responses to Postcard from New York- 2