They also got residents and visitors on stage for things like the park’s annual Out Takes. Celia goes to a 3 times-per-week line dance class and her dance buddy Kim asked Celia plus 3 additional line dancers to perform a line dance done to a Glen Miller medley. They christened themselves The Miller Mamas, were the first act on and were awarded great applause. Well done Admiral!

The park also does an annual Ladies’ Night Out dinner for women only. Again, Kim convinced Celia and their buddy Alaska Linda to help her do a lip-sync of Dianna Ross & The Supremes doing “Stop! In the Name of Love“. Their routine got a standing ovation. Celia says they didn’t think of themselves as the Supremes but rather as the Extremes. No photos cuz no men allowed. Well… unless they’re serving dinner!

RVing friend Mike Phelps plus 6 others did a piece for Ladies’ Nite Out which was a synchronized swimming exhibition… sans swimming pool & water!

Both acts were so well received they were asked for a repeat performance the following month so that those who weren’t back in the park yet could see what they did.

Btw, when they were rehearsing “Stop! In the Name of Love”, Celia listened carefully to the lyrics and thought “Is this how I would handle this situation?” The answer was a clear “Hell no!” So if they do it again next year they’re going to lip sync the song “Hit the Road Jack!”

Bisbee is a fun place to visit for a few hours. We learned about the Bisbee Breakfast Club restaurant in the old town of Lowell (now part of Bisbee) and have gone there a few times. We had lunch there with friends Jeff, Brian & Susan (plus Donna, Susan & Mike off to the left) then did the tour of the town… 10 minutes?

The old town sports what looks like an old movie theater, but we later discovered (by looking beneath the marquee) that the building actually started life as a the fire station for this town.

There’s not a single gas station anywhere in this tiny town… the Gulf sign and the non-functioning gas pumps further down the street are artifacts of days gone by. 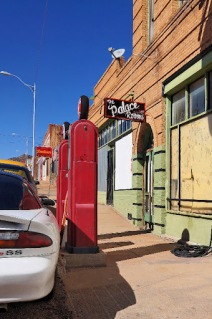 The local motorcycle shop has showcased a restored Indian across from its’ shop. But don’t let the old Indian fool you… theirs is a Harley shop.And the Bisbee Breakfast Club (called the BBC by everyone that eats there) is a frequent destination of hungry bikers. I understand they also have a location in Tucson.
Seems an unlikely spot for a gas pump right outside The Palace (yikes!), but this old relic is actually in front of what was once a Chevrolet dealership.

The sign for The Palace makes me wonder if it was once a hotel. Or my favorite speculation… perhaps a brothel! Nearly everything but the bike shop and the co-op organic market on the North end of the main street seem to be unoccupied.

Down and out for awhile

While all the rehearsals were going on for Out Takes and Ladies’ Nite Out, Celia kept saying she wasn’t sure if she was having a problem with allergies or if she was getting a cold. Well, the data is now in and it’s official: it was definitely a cold. It was a really slow moving virus that hit nearly all the park and took weeks to get run its’ course. I was about 10-days behind The Admiral, and it lasted longer. In fact, I was starting to worry that I wouldn’t get over it before we had to hit the road, but after about 6 weeks I realized I was coughing less and sleeping at night instead of all day, so I guess that’s behind us.

When we arrived in Benson, the truck kind of gave up the ghost. Turned out to be the high pressure fuel pump which Lawley Ford in Sierra Vista replaced under warranty. Replacing the pump is a really big deal as the cab has to be lifted off the chassis to get to the pump. The truck was back to full power again, though I thought I had some sense of ‘harshness’ when running on the highway… not a miss, but more like some cylinders were producing a little more power than others.

We also had a connector backshell missing from the engine wiring. A backshell is a plastic hood the covers and protects the wires as they leave the back of the connector and in this case also includes a mechanical device to separate/re-connect the connector halves. Dunno when it broke and fell off, but I suspect it was missing when we bought the truck from CarMax in Albuquerque, NM. You need the mechanism because these 96-pin connectors require 20#-30# of separation force. The connector is on the engine wiring harness and, as it turns out, the whole harness has to be replaced if the backshell is damaged. The diesel tech said he thought he might be able to get it done under warranty if we waited 3 months (he was afraid Lawley Ford would be blamed for damaging it). Sure enough, Lawley Ford, and particularly the diesel tech Leeroy Miles and the service rep Joe Wozniak, convinced Ford to replace the harness. As it turns out that was exactly what needed to be done: a surprise benefit was that the ‘harshness’ I mentioned when running above 45 mph is gone! The truck is running better than I can ever recall.

My point of all this diatribe is that if you have a Ford diesel (or gas!) truck and find yourself needing repairs or service anywhere near Sierra Vista, AZ, don’t be afraid to give this dealer a try. Initially I was very hesitant because we have all the Banks gear installed, but it wasn’t the issue reported by some Ford truck owners where a dealer refused warranty coverage because they claimed the modification might have caused a problem. Lawley’s tech disconnected the Banks electronics, then ran their regular diagnostics. I had to pay the labor of the extra steps, but that was a long way from the $3,200 bill to replace the high pressure fuel pump or the $1,200 to replace the harness!

We had towed our Toyota Highlander to Benson so we didn’t have to drive the truck for errands. Since we’re leaving it there for the several months we’ll be gone, we wanted it serviced so the old oil didn’t sit in it while it sits unused. Plus we had an incentive to get a couple recalls done, especially the cooling unit for the power inverter which can cause a fire on certain serial number cars. We contacted Sierra Toyota in Sierra Vista and they checked our car. Thankfully we aren’t affected by the recall for the power inverter, but we did have another recall for clips to be replaced on the carpet. So we were able to get that done before leaving plus have the car serviced while we waited.

To make it even better, friends Mike & Susan followed us to the Toyota dealer then took us to lunch at Golden Corral. I’m sure you know the place.. it’s the all-you-can-eat place with the Chocolate Fountain in the dessert bar. About the time we finished lunch I got the call that Highlander was ready, so the timing was perfect.

So, why all the blah-blah about getting our Toyota serviced? Because we paid about 1/2 what we normally pay the independent mechanic in Santa Fe. And that mechanic charges much less than Beaver Toyota of Santa Fe charges. We thought it was a bargain for the routine maintenance service we wanted, and we’re not used to dealers of any brand being this reasonable. Plus they washed the car and vacuumed the interior. Thank you Sierra Toyota!

My Canon 5D-II DSLR has gone to a new home along with all the lenses in January. In place of the 21.1 MP 5D-II, I bought a 24.3 MP Sony NEX-7. The NEX-7 is a much smaller camera body, easy to carry, and has more pixels on a smaller APS-C sized sensor. The Canon lenses I had won’t work on the Sony (yes, they make adapters, but the adapters didn’t include autofocus or aperture adjustment at the time I sold everything). So I have to replace lenses.

Initially I bought only 1 lens- there was just nothing available till the end of March! The 18-200mm zoom lens I bought, designed for Sony’s NEX video cameras, is pretty big compared to other E-mount lenses of the NEX line. But images are very good for a lens which covers focal lengths from 18mm thru 200mm (11X zoom range). Recently I’ve added several other of Sony’s E-mount lens and have still managed to go from about 25 lbs. of gear to maybe 10 lbs. even with all the new lenses. Best of all there’s no loss in resolution and equal or (under some conditions) better image quality thanks to Sony’s brand new EXMOR sensor.

The wait for the NEX-7 was significant as Sony’s Thailand factory, built specifically to build only the NEX line of still- and video-cameras and accessories, was devastated by floods in October of 2011. Since Sony had to start from scratch again, there have been significant delays. Lenses are way behind the need of users, and some models of NEX cameras, reviewed using pre-production samples, were many months behind the expected 1st delivery date. But all in all the NEX-7 is proving to be a very influential camera in the market as it has made a surprising splash in the world of interchangeable-lens-mirrorless-cameras (sort of a ‘range finder camera’ style reminiscent of the old Leica IIIF film cameras if you’re old enough to remember those).

I still have my Panasonic LX5 as back-up. It’s a very small camera which would easily fit in a pocket were it not for the protruding Leica lens that Panasonic designed into this camera and the optional electronic viewfinder. If the NEX-7 proves to be as good as I think it will, the LX5 will probably be going to a new home as well.

Signature tag from Bill McClung on the Sony NEX Forum at http://dpReview.com:

Never be afraid to try something new. Remember, amateurs built the ark; professionals built the Titanic!

Particularly meaningful to a couple old toots that discovered RVing during their ‘golden years’! 🙂

Celia and I are full-time RVers wintering (and now summering!) in Benson, AZ. The 2 bernese mountain dogs that initiated the name of this blog are gone but forever alive in our memory.
View all posts by bruce10b →
This entry was posted in Uncategorized and tagged Bisbee, Ladies' Nite Out, Lawley Ford, Lowell, Out Takes, SKP Saguaro, Sony, Sony NEX-7. Bookmark the permalink.