After a month and a half of whining, the news is good this time. It took 6 weeks but the new landing gear arrived from Lippert Components Inc. (they manufacture the chassis for Keystone/Montana) and the legs are installed… took about 3 hours of labor.

And this time the locking pin extends thru both sides of each leg. No weird angles; no forcing the pin thru.

I was able to also have them replace the after-market connector in the bed of the truck. The optional Ford integrated trailer-brake controller had frequently given us a TRAILER NOT CONNECTED message since late March of last year. In hind sight, it was caused by an intermittent ground connection where the after-market plug connects to Ford’s factory-installed wiring harness. Besides causing intermittent failure of the trailer running & brake lights, it also caused the trailer brakes to be intermittent. Yikes! Our work-around had been to use the Ford-provided plug next to the receiver hitch which, unfortunately, significantly limited the angle between the trailer and the truck when parking. [ Like the integrated trailer-brake controller, the hitch is part of Ford’s optional tow package. ]

Back at Santa Fe Skies, I was surprised that parking was less of a problem this time. In part because it was the 2nd time getting into the same space, but mostly it’s that the opening to the site is really wide. I was able to maneuver endlessly till I walked the rig close to the patio. If we aren’t real close, the sewer hose ends up going over a slope which causes the hose-support (the ‘caterpillar’) to fall over about once per week… usually about the time I have to drain the black tank. Now the tank seems to drain properly and the hose stays put.

Best news of all is that we have the last 2 Goodyear G614 RST tires installed. The rig is pretty much good to go at this point since I was able to lube the spring shackles while the wheels were off. I told the manager at Discount Tire that they had seen way too much of us over the last year. First it was the truck tires which took several visits… not least of which was because I had no “key” for the spare tire. Then I found  one of the new tires going flat which turned out to be a loose Schrader valve. We had them repair a tire on the Highlander which went flat after I put that car on the trailer to bring it to Santa Fe. And lastly was the debacle of one-at-a-time tire-replacement for the Montana. I must have been in an out of the store a dozen times.

Even though the truck & Montana are ready to go, we’ve decided to delay the trip to Maine. We’ve watched the endless mid-west heat on the weather reports which have us very concerned. The hot spell has gone on so long we chickened out. At this point we think our best bet is to stay in Santa Fe till the middle of September and then head to Benson, AZ for the winter. Then next year (2012) we’ll leave Benson about the first of April and head to Santa Fe for annual checkups before leaving for Maine in the middle of May. That schedule will leave plenty of time to return by way of some of the Canadian Maritimes (New Brunswick, Nova Scotia, Prince Edward Is.) if we want. Probably have to skip Newfoundland and Labrador this time, but we can see Quebec and SE Ontario. The Maritimes were our easterly destination in 2010 when the house called us back.

I thought I should touch on what I learned from this. When I first had the landing gear failure, I talked to several friends about what I thought had caused the problem. I’d hoped someone could offer a method of avoiding a repeat incident. I think it was Dan Weigman who said he always has the front of his rig supported by his truck when jacking anytime he removes a tire. Plus he jacks the rig only part way via the frame, then he puts another jack under the axle to get the tire clear of the ground. Jacking a fifth wheel this way limits how far the frame has to rise on one side, puts a minimal load on the axle (way less than it sees underway), and keeps all load off the landing gear. So I tried this approach for the last 2 tires and think this just became SOP for tire changes on the dog house.

The only issue is that you need enough blocking. A bottle jack just doesn’t have the extension range to lift either the tire or (once the frame is up) the axle. I have 5 dozen 2″x8″x18″ scraps plus 2- 2″x6″x6′ boards (used for leveling) and it wasn’t enough. So before we leave for winter pasture I’ll need to add more blocking. And I’ll need to replace the plastic “milk crate” (one of those cheap knock-offs from Crates&Barrels) which dies from UV in a matter of months.

Skip this paragraph if you don’t want to hear me whine: our Montana (3400RL) has a corrugated plastic cover over the bottom. It keeps out dirt and debris and some of the winter cold so it’s much appreciated. What I don’t appreciate is that the frame doesn’t have defined jacking-points which, if they were there, would be covered by that same corrugated plastic. As a result, I can’t really be sure where I’m putting the jack relative to the frame. In fact, at one point I punched a hole in the plastic cover because there was no frame underneath the ram of the bottle jack. So a person has to be careful about where the bottle jacks are placed when jacking the frame. It would have been so easy for Lippert (they built the chassis which Keystone builds upon to create a Montana) to have welded pads under the frame to retain the end of the bottle jack ram. Also, jacking the axle to get the tire clear (200# tops) is a little scarey as the underneath surface of the axle is curved and not appropriate for jacking (the springs are mounted to the top of the axles). I use a block of wood which does little more than add friction, but it would be even scarier without it. End of whine.

One last thing: RVing friends Becky and Dave are full-timers we met in Sioux Falls, SD last July and we’ve stayed in touch for over a year now. A couple weeks ago Becky started a blog here so she wouldn’t have to e-Mail all their photos to family & friends. Here’s a couple photos of Celia reading her blog. 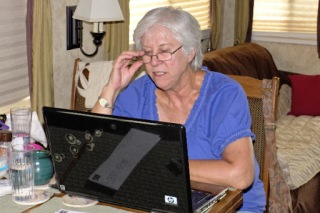 Clearly reading Becky’s blog is good for your state of mind. Looks like it’s “Admiral Approved”!

Celia and I are full-time RVers wintering (and now summering!) in southeast AZ. Our 2 bernese mountain dogs, Annie & Kelly, that initiated the name of this blog are gone but will live forever in our hearts.
View all posts by bruce10b →
This entry was posted in Uncategorized and tagged Canadian Maritimes, Goodyear G614, jacking, tire changing. Bookmark the permalink.

2 Responses to Postcard from New Mexico- 4