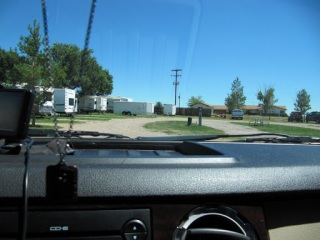 Today was a l-o-n-g drive. It took us from Cheyenne, WY through Denver, which is never a good thing even  before the commute, and then south. But we plowed thru all the I-25 landmarks as we headed south of Pueblo to Colorado City. Once again Mr. Garmin had his head buried where the sun don’t shine, but we eventually got it sorted and arrived at the KOA which is on the east side of I-25, not the west, thank you very much.

Not much here so a 2-niter might seem a waste. But we were tired after the ugly drive and we were stalling because of what was waiting for us in Santa Fe. But we did take advantage of the extra day and do some sight seeing around the spread-out town and West into the hills along CO-165. Nice drive. We even stopped at “the castle” which might have been fun if we didn’t have to listen to the nut case that was the owner/builder. He spouted off in a constant diatribe about any axe he had to grind. But it’s his place and we didn’t have to be there. And the castle is a huge project for one person.

The scenery along CO-165 was great with some open meadow areas used for cattle. This is looking back toward Colorado City with the Great Plains beyond. For whatever reason I have a hard time realizing that Colorado (and New Mexico for that matter) border the plains. There’s a similar view from Las Vegas, NM.

The local restaurant was fine and not expensive. Just don’t order anything with green chile expecting it to be green because it’s red. But that’s their recipe and they’re stickin’ to it. Since I had my gall bladder removed in 2002 I’ve become less and less tolerant of spicey food and at this point I’ve given up. So I kept to run-of-the-mill diner food and was very happy with dinner.

Celia and I are full-time RVers wintering (and now summering!) in Benson, AZ. The 2 bernese mountain dogs that initiated the name of this blog are gone but forever alive in our memory.
View all posts by bruce10b →
This entry was posted in Uncategorized and tagged castle, CO-165, Colorado City, KOA. Bookmark the permalink.