Another learning experience, this time in Albuquerque

Our overnight stay in the Camping World parking lot was a breeze since we’d had a generator installed before we moved the Dog House away from TravelTown. Just push a button and presto! we had 115 VAC to run everything we needed on a cold night.

We also learned our little generator is even louder than those on the power boats we occasionally anchored near when cruising. We remembered their generators rumbling away all night, destroying the serenity of a quiet anchorage, so as soon as we had washed up after dinner we shut it off. Somehow a parking lot falls a little short of a quiet anchorage, especially with I-40 about 100+ yards away. And I doubt anyone noticed- or could hear!- our thoughtful consideration. 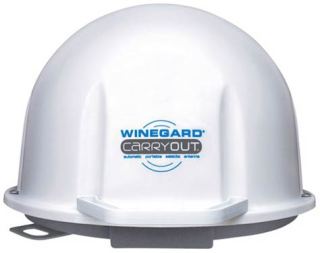 Camping World can be a one-stop cathartic for a bank account. We had a combo washer/dryer installed plus a satellite antenna that reminds me a lot of a small-scale something-or-other from a missile launch facility.

After we got the Dog House back and had moved it next door to Enchanted Trails RV Park, we continued to make regular visits to Camping World so we wouldn’t suffer withdrawals. Which is a lot like a smoking cessation program that lets you continue to smoke.

We found a few more can’t-do-without items from home and from Home Depot. Like tools and a 2″ x 8″ board we had cut into a couple 6′ lengths for leveling the trailer at a campsite. And a 2′ step ladder for me cuz Mrs. Bowman’s little boy has legs that don’t quite reach all the way to the ground (I can’t even see into the bed of the truck much less reach the hitch!).

I also spent an hour on the phone ordering DirecTV equipment ($0) and service (not $0). When everything arrived at the house in Santa Fe I hauled it to the Dog House and hooked it up. Everything went well except for this one small thing: I couldn’t get the DirecTV receiver set properly so it would work with the automated dish. I finally had to give in and ask for help. One of the Camping World sales people mentioned just the right thing (18″ round dish) and in a matter of minutes I had it all working.

Enchanted Trails RV Park is a funky nostalgic trip back to the days when Route 66 was the most-used route to cross the USA. As we pulled into the park the first thing we saw was the polished aluminum skin of a restored small travel trailer connected to a restored 1947 Hudson. And at the owners quarters at the back of the park is a restored 1950 Hudson. Hudson’s advertising that year read “Step down into a Hudson”, a reference to their “step-down chassis” design.

The park owners have also restored an old Wurlitzer theater organ. The organ arrived as a basket case (literally!) but today it’s a beautiful old organ that looks for all the world as it did when it was in daily use decades ago. Well, except for this one small thing: right in the middle is a computer screen plus computer keyboard connected to a Dell computer. After restoring the organ they added the computer to voice the organ to match the Wurlitzer in the Paramount Theater in New York. Pretty impressive stuff and a real show piece!

The park is located beside what appeared to be a large open field. I found an unlocked gate and took Annie over for a walk. My idea was to get her off leash if it looked OK. What I was worried about was cactus, but what I found was miles of unfenced grazing land with cattle not very far away. So much for letting our dogs off-leash! No rancher is going to be happy with someone’s dog chasing his cattle.

So our walks were around the park grounds or down the frontage road, but other than that it was a pretty boring stop unless you go into Albuquerque for some sightseeing e.g. to Old Town, Indian Cultural Center, or my favorite stop… PJ’s Triumph/Ducati on the east end of Central to check out all the latest and greatest in 2-wheel dream machines.

Celia and I are full-time RVers wintering (and now summering!) in southeast AZ. Our 2 Bernese Mountain Dogs, Annie & Kelly, prompted the name of this blog but sadly are gone because of kidney failure. They will live forever in our hearts.
View all posts by bruce10b →
This entry was posted in Uncategorized and tagged Enchanted Trails. Bookmark the permalink.